TÜV SÜD opened the new DYCOT test laboratory for the automotive industry on 30 November 2016 in Czech. The investment, which also offers a physical simulation of dynamic loading of components and structures of vehicles outside the virtual simulation, recently won 3rd place in the Research and Development category of the Investor and Business Property of the Year 2015 competition promoted by the Czech agency CzechInvest. The DYCOT Project is an important investment of TÜV SÜD and an innovation in the Central European automotive industry. 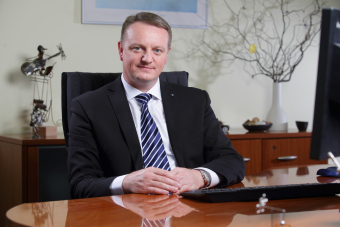 Jiří Socha, Director of the Auto Service Division at TÜV SÜD Czech, explains the thoughts about developing the new DYCOT-laboratory. In the interview he talks about his expectations for the new project.

How did the idea for the new TÜV SÜD laboratory come about?

The idea to build a new laboratory was the logical outcome of white papers on trends in the field of vehicle testing and the current situation on the local and European markets. The growing pressure to reduce the time of the development cycle for new vehicles along with the constant effort to reduce costs are reflected by new non-destructive methods including physical simulations of the impact events that vehicles and their systems experience during traffic accidents.

While actual crash tests with entire vehicles are often carried out by OEMs in their own test facilities, the field of non-destructive physical simulations of impact events was more unattended. Bu this test procedure offers wider use for a more diverse palette of potential clients. With this new service we want to continue to be the most sought-out partner for vehicle manufacturers. We are aware that when we want to remain an authorised test facility and independent laboratory respected on an European scale in the future we have to be active in the development of testing methods. Such a strategy pays dividends in the sense that our homologation experts are in close contact with the test laboratories to be a competent partner for OEMs as well as their suppliers. Consequently as an authorized test facility we can cover a large part of their needs during the development and approval of new models.

When did you take the first steps towards the new laboratory?

The first ideas with the specific outline of the future laboratory were conceived in 2013. Following a preliminary consultation with one of our main clients the idea for the new laboratory was out in the world. Preparation of the detailed investment project took several months of intense work. As a result, in spring 2014 we received the approval of the board of management.

Who was involved in the project?

At the time the project was kicked off, three people worked intensively on the initial concept, then the project team was gradually increased. Today the entire team is composed of 15 specialists with various roles, from the project manager to the test technicians, cameramen, experts in measuring equipment, and mechanics. Apart from the actual project team, we of course worked intensively with many service centers of our company, such as controlling, quality management, purchasing, HR, and IT. Intensive collaboration and exchange of information took place not only at the local Czech level but also at the level of the holding. During the course of the solution we brought approximately three dozen vendors into the project, who endeavored to provide services to us in many areas of the project: from developer activities through the delivery of key technical units to the calibration of measuring equipment and services associated with the securing of the facility.

What was the most challenging moment of the entire project? How did you overcome it?

The automotive industry is a heavily competitive environment. The hardest thing was not exciting our future clients over the thought of a new modern laboratory at an European level, but to convince them that our company is the most advantageous supplier for the given segment in the future in terms of quality and cost of services. The declaration of interest in our services by future customers including their formalisation in contractual form was fundamental for the long-term sustainability of our project. In this phase our negotiations were greatly helped by the fact that we had focused on the idea of the new laboratory ahead of our potential competitors - thanks to good project planning and the global support of the holding.

What expectations do you have for the new laboratory?

The new testing facility brings us and our clients new opportunities: in the area of vehicle safety we have moved from quasi-statistical tests to physical simulations of events that take place at high speeds. This is the only technology of its kind in the region of Central and Eastern Europe, in some Parameters it is even unique throughout Europe. An important aspect of the new technology is its interdisciplinary: this is because the simulation of dynamic events is interesting for other fields as well, such as the aviation and aerospace industry, for example. I therefore feel that the new test facility will offer definite development potential for the entire TÜV SÜD Group.

In which areas will the new laboratory operate in future?

We’ve traditionally been strong in testing entire vehicles and their systems, in the area of component testing we focus both on the exterior and the interior of the vehicle. The new laboratory expands our options for testing systems in vehicles against dynamic events at high speeds. Furthermore we can also offer services for commercial vehicles to test e.g. the driver's cabins.

Will the services of the new laboratory be also offered internationally?

The location of the laboratory reflects that the primary goal of the project was to offer modern technology to the Czech automotive industry, end producers of vehicles and their suppliers. Already in the preparations of the project we of course made it our objective to pursue European competitiveness for the new test laboratory. The location of the laboratory in Czech Republic certainly hereby is an advantage. Finally, as we act as an independent laboratory we are open to any global cooperation.

What personal impact and new insights did you gain from working on this project?

During our work on the project I once again realised that certain risks cannot be completely evaluated, no matter how careful your project management has been. Sure, theoretically it is possible to predict each risk at least at a general level, but preventive measures then logically remain fairly general. The real situations when completing the project are much more diverse and often demand quick solutions. We always found suitable solutions - although if sometimes they arised unexpectedly. These can be designed and effectively implemented only in the case that the project is being managed by a team that is pursuing the same target and you can rely on.

Who is Jirí Socha

He studied at the Czech Technical University in Prague with a focus on combustion engines and motor vehicles. After the completion of his doctoral studies, he worked in various positions in the field of automotive development and testing. He has worked at TÜV SÜD Czech for 17 years, as the Division Director and authorised officer since 2013.

Photostory: Get a first glimpse of our new DYCOT laboratory

Get an an idea of what a test looks like - we have compiled a photostory from the preparations and performance of sled testing for the simulation of real traffic accidents.

Read now
Share this article
Print
Recommend page
Take the next step
How can we help you?
Connect with us