In the future, emissions of EU vehicles to be exported to South Korea will be measured in TÜV SÜD’s testing laboratories. South Korea's state measurement institute, K eco (Korean Environment Cooperation), and TÜV SÜD signed a cooperation agreement. Under the cooperation agreement, TÜV SÜD is the partner of European OEMs for accessing this important Asian market. TÜV SÜD also supports K eco with the introduction of the WLTP and RDE (Real Driving Emission) exhaust gas standards. 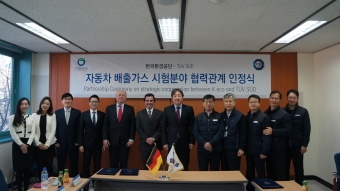 Regarding the sensitive topic of measuring the exhaust gases of EU vehicles, South Korea's authorities fully rely on TÜV SÜD's independent expertise. Now the agreement takes the long-standing cooperation between South Korea's authorities and TÜV SÜD, characterised by fairness and mutual trust, to a new level. Korea Environment Corporation (K eco) is a quasi-governmental organisation under the Ministry of Environment. The corporation is aimed at contributing to eco-friendly national development through improvement of environment and promotion of resource circulation. Our impartial expert reports should inspire South Koreans to trust in EU cars. Prior to this specialists from TÜV SÜD and K eco had spent over a year comparing the measurement results of various vehicles in Germany and South Korea in intra-laboratory tests, thus establishing the technological basis for performing advance emission measurements in Germany on cars intended for the Korean market.

The partnership between TÜV SÜD and K eco is also a major plus for European car manufacturers. In TÜV SÜD, they will have an independent contact for all issues related to market approval and access to South Korea's market. Both sides can refer to TÜV SÜD's measurement results. This leads to an advantage for all stakeholders because it inspires trust, which is the basis of good economic cooperation and prosperity.

What exactly can be tested, and how? TÜV SÜD tests vehicles produced in the EU which are destined for export to South Korea. While these vehicles are primarily diesel cars, petrol-driven cars will follow at a later date. Diesel vehicles will be tested against the EURO-6 regulations, while testing of petrol cars will be based on US emission standards. In conformity of production (COP) tests, vehicles will be sampled from ongoing production. COP tests make sure that all cars in mass production, from the first car to the hundred thousandth, comply with the emission limits for carbon monoxide, nitrogen oxide, hydrocarbons and other pollutants.

Emissions in road traffic are critical

Beyond regular measurements and inspections on vehicles, the contracting partners also agreed on cooperation in establishing WLTP (Worldwide Harmonized Light-Duty Vehicles Test Procedure) and RDE (Real Driving Emissions) in South Korea. WLTP ensures greater focus on practice and enhanced comparability across many areas, including consumption and emissions, RDE tests are carried out with the help of portable emission measurement systems (PEMS), which are first installed on the vehicle to measure emissions during real driving along a defined route.

Tests according to all global standards

Either NEDC, WLTP or Euro 6, OEMs can have their vehicles tested according to all common international standards in TÜV SÜD’s network of emissions testing laboratories. The exhaust-gas experts can test and measure the emissions of all types of vehicles, from motorbikes to passenger cars and heavy trucks, at their testing laboratories in Heimsheim (near Stuttgart), Pfungstadt (near Darmstadt) and Rostocky, Czech Republic, and with the help of portable emission measurement systems (PEMS). TÜV SÜD's exhaust laboratory network offers all common international emission measurements. Using portable emissions measurement systems (PEMS), the experts can now also determine real driving emissions (RDE). In our network, we can offer customers an entire range of tests according to international standards. One-stop testing for all emission values from a single source is what we are striving for.

Download now
Share this article
Print
Recommend page
Take the next step
How can we help you?
Connect with us